As we all known culture pervades every aspect of people’s lives: their way of thinking, their ideals and expectations, their behavior and attitude, their motivation, relationships, and last but not least, their way of assimilating knowledge and skills.

In the modern world educators are finding their classrooms (in e-learning as well) filled with students from different cultures. Many observe that these cultural differences have a significant impact on the learning process. For example, students from higt power distance cultures often seem uncomfortable with professors who want to be called by his first name and Asian students appear guiet and reflective in the extroverted, hight participation American classroom.[1]

This situation raise the question of adequacy between learners’ expectations and preferences on one hand, and learning methods on the other. Joy, Simy, Kolb, David A. in the article Are There Cultural Differences in Learning Style presented that researches examining how individuals born and currently living in diferent cultures vary in their approaches to learning. Using the frame work for categorizing cultural differences from the Global Leadership and Organization Effectiveness (GLOBE) study (House et. Al 2004), cultures are examined by regional clusters, national characteristics and individual cultural dimensions. And the scholars have come a ground with respect defining culture. Culture can be conceptualized as “shared motives, values, beliefs, identities, and interpretations or meanings of significant events that result from common experiences of members of collectives that are transmitted across generations” (House et al 2004).

Researchers have introduced a number of definitions for culture. As far back as 1952, Kroeber and Kluckholn (1952) identified 164 definitions of culture in the literature. Inherent in almost all definitions is that culture is a pattern of thinking, feeling and acting that is rooted in common values and conventions of particular societies.

By incorporating three definitions of cultures, a workable definition can be achieved: Culture is the total way of life in a society; it is the collective programming of the mind that distinguishes the members of human groups from another in terms of shared beliefs, the ideologies, and the norms that influence the organizational action taking. (Fletcher, 1979; Hofstede, 1984).

An example of the differences can be seen in picture 1 below: 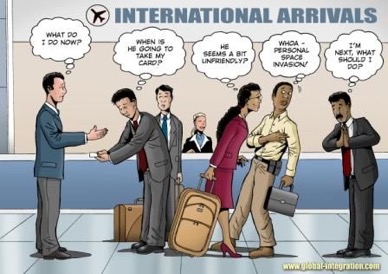 There is a lot of research from many countries which findings reveal that cultural and social aspects are very important for peoples learning habits.

No significant difference between Chinese and Australian students was found on the sensate–intuitive learning style construct. They found that the Chinese cohort of students were strongly visual, sensate and global learners. Two potential areas of weakness are intuition and verbal learning skills, given the very low percentages for these styles. In terms of what distinguishes Chinese students from Australian students, Chinese students are much more likely to be global learners, are less active learners and are less intuitive. The results suggested that there are substantial differences in learning styles between the two countries and programs managers need to consider these differences when structuring course for these students.

Virginia Mihaela Dunitrescu in her article Cultural Challenges Posed by E-learning in an Ethnically Diverse Academic presented Geert Hofstede’s 6-dimensional model of cultural analysis to identify the main cultural differences that may emerge in the process of blended learning. She discerned few of these dimensions:

The first cultural dimension analyzed by Hofstede, power distance PD, understood as the extent to which the less powerful members of institutions and organizations within a country expect and accept that power is distributed unequally, has multiple “consequences” in education:

in large PD societies, where people tend to view inequality and hierarchy as natural, all education system is teacher-centered: the educator appears as an authoritative guru who commands respect, initiates communication with his students, passes his personal knowledge to them, outlines paths to follow, and appreciates order (for instance, students are not supposed to speak up in class uninvited). The teacher’s authority is similar to that of the father as head of the family. Since he or she is regarded as an unquestionable source of authority, the teacher cannot be publicly criticized, challenged or contradicted.

By contrast, in small PD societies, which are more egalitarian, the education system is student-centered. The teacher, perceived as a competent person, treats his students as equals, so he expects and encourages them to think and act independently (for example, to speak up in class, ask questions, even contradict and criticize teacher, and finally find their own true). Hence the different way of looking at the effectiveness of learning in the two types of cultures: in one case, the key to success lies almost exclusively in the teacher’s hands (and depends on his pedagogic excellence), in the other, the quality of the education process results from the amount of two way teacher-student communication in class, and ultimately on the student’s own merits. Virginia Mihaela Dunitrescu revealed that very hierarchical cultures with high PD scores (e.g. Far Eastern cultures, most Eastern European cultures) are expected to score low on the individualism scale, whereas egalitarian (low PD) cultures (e.g. Scandinavian countries, the US) are also the most individualistic.

Behavioral patterns in education differ in individualistic and collectivistic cultures in terms of:

students feeling comfortable speaking up in large groups vs. small groups; weak vs. strong face-consciousness (or the importance attached to personal reputation, based on the principle that neither the teacher not the student should lose “face”); and acceptance of confrontation and conflict vs. an effort to maintain harmony in learning situations. Researchers have noticed significant differences between the attitude of students from high and low PD cultures towards their teacher; on the one hand, in high PD cultures such as China (PD 80), the Middle East (PD 80), most Eastern European countries (for instance Romania, PD 90, and to a lesser extent Poland, an exception to the negative PD/IDV correlation, whose PD score, 68, is counteracted by its quite high IDV score, 60) the teacher is regarded as an infallible and unquestionable source of authority, whereas in lower PD cultures (e.g. Israel, PD 13; white South Africa, PD 49), students are more tempted to express points of view contrary to the ones of the teacher.

Article author sad the new element of technology that interferes between teacher and student in the form of students’ access to Internet material destined for either self-study or course and seminar debates has the effect of decreasing the psychological distance between learner and teacher in more ways than one: apart from exposure to multiple and easily accessible resources, students gain access to a multitude of points of view (and sources of authority) on the same topic, some of which may be contradictory. Author distinguish that Asian students in a multicultural environment soon learn to bridge the culture gap between high and low PD and IDV by becoming more willing to express personal, critical opinions, even if they may differ from those of their group. This is totally in keeping with many researchers’ opinions about the egalitarian, democratic nature of the Internet. Another far-reaching cultural aspects – UAI – the extent to which the members of a culture feel threatened by uncertain or unknown situations. In other words, understood as a measure of a culture’s tolerance of unpredictability, novelty, uncertainty and ambiguity. In education, it can be used as an indicator of a willingness to take risks by innovating or exploring new methods of teaching and learning (characteristic of low UAI cultures) versus a preference for the safety of more traditional methods (specific to high UAI cultures).

The interesting thing is that Hofstede insists there still is a clash between low and high UAI cultures in terms of people’s use of new technology: at one end of the continuum, there is wide acceptance and use of mobile phones, the e-mail and the Internet; at the opposite end, most people are still reluctant to use them, and prefer the security of face-to-face communication and paper printed material to avoid the risk of miscommunication. They noticed the same distrust of emailed information (e.g. deadlines and other important dates) as opposed to face-to-face communication. While some of students (from such cultures as China, Indonesia, India, South Africa) tend to act upon the e-mailed information, the typical Romanian or East European student feels it necessary to first check and sometimes even double-check it in a face-to-face dialogue to make sure their understanding is correct, out of a characteristic (high UAI) fear of making mistakes.

The same attitude is noticeable when students are asked to send an assignment (e.g. a test/an exercise) via email as opposed to presenting it in class, and especially when they receive guidelines for preparing their end-of-semester projects or their dissertation papers either by email or by checking the information available on the program’s website, as opposed to discussing them face-to-face. Likewise, lectures delivered in the form of multimedia presentations using a mix of slide shows, video clips or audio portions, although enjoyed by students, must be supplemented by the teacher’s detailed explanations on the main points of the topics presented so that high UAI students may absorb the new information with more confidence.

In the table below (table 1) you can see more cultural and social differences. This is Erin Meyer’s 8 different dimensions of culture map. 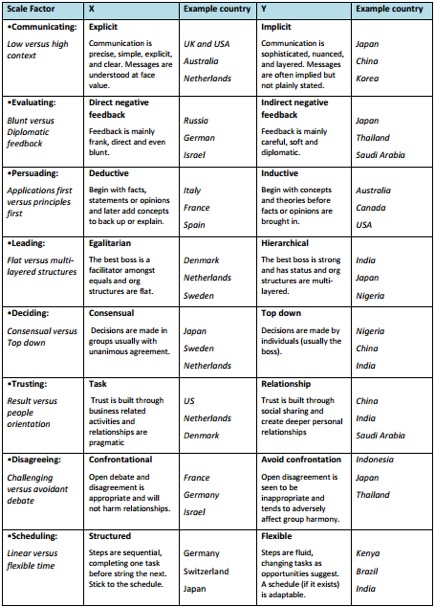 For the better understanding of the scale factors, there is wider explanation:

Considering the need for quality in transnational education, an important starting point is to examine differences between the student cohorts that might exist due to cultural differences.
Troy Heffernan (2010) in research “Cultural differences, learning styles and transnational education” identify differences between Chinese and Western students, and reasons for these differences. It is apparent that the collectivist nature of the political system and the Confucianism elements of the Chinese identity have influenced teaching and learning styles in China. For example, noted that the collectivist culture in China has led to students being taught in large groups, with little tutorial or one-on-one sessions taking place (Xiao & Dyson, 1999), which in turn has impacted students’ ability to express their own opinions. Xiao and Dyson (1999) also noted a strong hierarchical relationship between teacher and student, leading to a teaching-centred learning environment. Confucianism appears to partly explain the existence of this teaching-centred learning environment. Also noted that the Confucian value of modesty of behaviour has reduced the likelihood of Chinese students questioning their teachers (Chan, 1999). Other values associated with learning in Confucian heritage countries, of which mainland China is one, include:

Watch this video about cultural differences:

In this 2 min. video, Derek Sivers shows that “there’s a flip side to everything”.

[1] Joy, Simy, Kolb, David A. Are There Cultural Differences in Learning Style https://weatherhead.case.edu/departments/organizational-behavior/workingPapers/WP-07-01.pdf

[2] Rawn Shah. The Culture Map’ Shows Us The Differences In How We Work WorldWide https://www.forbes.com/sites/rawnshah/2014/10/06/the-culture-map-shows-us-how-we-work-worldwide/#5b0ce8385bcb

Closing the gap between cultures by Kristijonas Jakubsonas is licensed under a Creative Commons Attribution-NonCommercial-ShareAlike 4.0 International License.

This project has been funded by Erasmus + programme of the European Union. This web site reflects the views only of the authors, and the Commission cannot be held responsible for any use which may be made of the information contained therein.